Every year on the 19th September is Talk Like a Pirate Day and this year in Sydney, The Rocks we are hosting a Treasure Hunt where ye all speaketh ya scurvy, boot legging pirate lexicon.

Join us for a fun treasure Hunt in The Rocks Sydney, exploring pirate expletives and a few of the famous historic pubs and Rocks mysterious haunts.

Tasting a fine drop of the amber 3 Sheets ale or Nelsons Blood at The Lord Nelson. A shooting of Silver Bock Beer or Bees Knees at The Australian. Shiver me Timbers at The Hero Of Waterloo, Scratching the Dirt at The Fortune Of War or kissing the blarney stone with Kilkenny Guiness (genius) at The Mercantile. 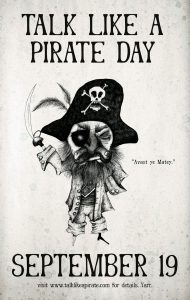 Talking like a pirate is a skill that can be easily mastered with a few choice words changed ye about. Be warned it be’eth a fandangling from the fore-masts if you decipher the secrets where-abouts. Of talk like Pirate Treasure Hunts mystery mayhem arrr ye Davey Jones Locker sunken Treasure Chest be bound 1st!

This pirate fun website may provide a bit of hint. There are numerous links to pirate behaviours that will talk of tall tales and dangerous ales. To get a wee bit excited me lads n lasses here is our song to revel n rouse the pirate Jack Sparrows. Did you know The Barbarossa (meaning “red beard” in Italian) Brothers Aruj and Hizir became rich by capturing European vessels in the Mediterranean Sea along the North African Barbary Coast.

Other now famous but at the time downright dangerous pirates to steer ye ship clear of include;

Ahoy Talk Like A Pirate People, it’s time to Practice Singing Pirate Songs Like Yo Ho Yo Ho a Pirates Life For Me

Try Yo Ho Yo Ho A Pirates Life For Me!

Master the lot and you can Talk Like a Pirate smiling with a parrot perched on your shoulder.

Now complete ye enquiry and stake $100 quid to enjoy 4 beers and a rum toddy along the Sydney treasure trail!!!!

Charity Donations and Fundraising For Great Causes whilst Building your Teamwork

Everyone is welcome to join in the Treasure Hunt.
Get your Corporate (corrr Pirate) team building crew on board.
We’ll take your loot and after costs donate the proceeds to Legacy helping our diggers recover.