Ahoy there me hearties, set the anchor, and pull the sails, for here’s a story of the high seas. A story of the time the IAG team were welcomed on board

, and conquered the Sydney Rocks Treasure Hunt. Their mission was set, to travel the rocks in a team building adventure through uncharted waters, in search of the hidden treasure before the rival crews. Lead by their captains, the crews sailed through The Rocks, answering clues, uncovering secrets and navigating their way through the treas

ure map for the hidden bounty.

The crews disembarked from the same port, and soon found themselves battling it out across Sydney for the treasure.  As the clues started to lead them

in the right direction, the contest grew stronger. Only one crew would prevail in locking the mysterious contents of the chest, and every pirate wanted to be a part of that triumphant crew. Some crews bonded together as others chose the pirate life, turning to bribes and hornswaggle to find their way to the treasures location.

But at last, by days end, the treasure was unearthed, guarded by the remote Pier One tribe. Finding the treasure united all the crews as they rejoiced in the riches of the treasure chest and the Holy Grail hiding within. 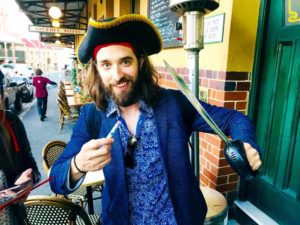